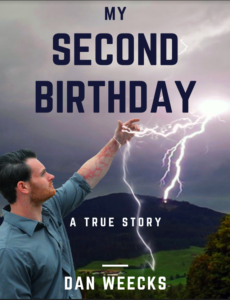 My Second Birthday is an autobiography written by Dan Weecks.  This is a factual recount of not just the actual lightning strike itself, but more importantly is a story of transcendence in the years following.  After being struck by lightning on July 2nd, 2010 while mountain biking through the Austrian Alps, Dan’s life completely changed.

After being told not to exercise for 2 years, Dan gained an unhealthy amount of weight.  After seeing 256lbs in the rear-view mirror,  Dan decided to become a nationally certified personal trainer and coached himself to lose over 70lbs over the course of the following year.  More incredible than the strike itself is the story which has unfolded since, in which Dan went from being told he may not survive the night and to stop all physical activity to becoming a sponsored athlete, cast American Ninja Warrior competitor, and TV host with viewership around the world, including on the prime-time Japanese show Amazing Stories.  Along with managing multiple companies in the advertising and content creation industries, Dan currently works as a commercial pilot and Certified Flight Instructor, and has his book Bodybuilding Anywhere published on Amazon.

In the years since the lightning strike Dan has accomplished the seemingly impossible: everything from working with a Presidential candidate on the campaign trail, working with (and receiving a written commendation) from the Secretary of the United States Air Force Barbara Barrett, and lecturing to schools and audiences in multiple countries, to teaching airline pilots of tomorrow how to fly airplanes, and being the Director of Operations for an emergency response agency.  Throughout the book, Dan reminds readers that he is essentially no different than those reading the book, but rather provides valuable insight about how the lightning strike revolutionized his outlook and world-view.

In the book My Second Birthday, Dan discusses what he felt and experienced during the strike, shows pictures of the actual strike burns, witness testimonies of the event, and how his life has changed in the years since.  Dan’s description of the ambulance ride, hospital visit, and life since is quite electrifying and is sure to keep you turning the pages.  The book is expected to release in late 2021 in print and digital formats.  To follow the progress and be notified when the book is available for sale, please subscribe to our free newsletter.  For more information about Dan, visit DanWeecks.com.